TALE OF A COLD WINTER NIGHT: COMPASSION IN ACTION 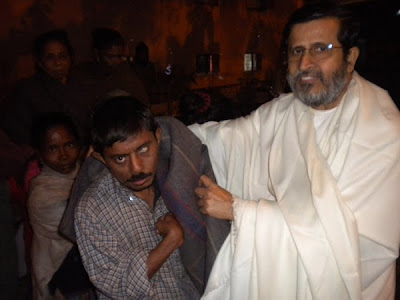 Seldom has the city of Kolkata experienced such a chilling winter. Braving the fearsome cold weather Baba and two mission volunteers recently set out to distribute hundreds of warm woolen blankets to the numerous, forgotten homeless destitute who don’t even possess a square piece of cloth to shield themselves from the coldness. Every individual is dear to them, be it rich or poor, irrespective of cast, creed or religion.

Tonight Baba has no specific destination in mind. As the car makes its way through the alleys and by lanes of south Kolkata he notices a number of homeless beggars who have made the pavement their temporary abode, all crinkled up, and partially covered with thin pieces of cloth. Baba gets out and with care he wraps every single one of them with warm woolen blankets.
This act of benevolence seems more like an offering to god than charity. All the poor homeless souls bow down in admiration and gratefulness for Baba’s gift to them. The whole affair seems to be an exchange of love and respect, taking place…in silence…in the cold of the winter night…whiles the whole city remains in a deep slumber. 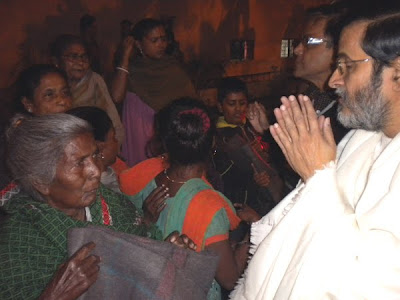 The night was becoming darker and colder. However Baba kept on moving forward and giving away blankets be it a wrinkled old man or a small handicapped boy……his service was towards humanity. Hence it was same for one and all.A child and its mother were tucked away under a thin cloth at the corner of a street under the magnificent deep blue sky, though the wind is blowing fiercely. With love and care Baba covers them with a blanket. The mother opens her eyes in gratitude, speechless.
Baba’s work was not over yet. He keeps on walking and serving numerous homeless souls. Three small boys were sleeping alone with a thin blanket covering all three of them. Baba wraps them carefully with the thick woolen. They will sleep comfortably for the rest of the night, waking in the morning to find a beautiful present of love and warmth.
Posted by Baba Shuddhaanandaa at 9:34 PM 1 comment:

My heart bleeds with pain for those who have lost their lives in the Haiti Earth Quake and those who are struggling for a little breath from under the debris of the destruction.

This is the time when every one of us have the opportunity to open our heart in prayer and send forth positive healing vibrations and financial support to those who are in dire need of funds. All of us from Lokenath Divine Life Mission and Fellowship join our souls together and invoke the Higher Soul to help and heal the suffering people of this natural disaster.

Love and prayers, Baba
Posted by Baba Shuddhaanandaa at 5:53 PM No comments: